Tencent is pleased to support the open source community by making RapidJSON available.

RapidJSON is a JSON parser and generator for C++. It was inspired by RapidXml.

More features can be read here.

JSON(JavaScript Object Notation) is a light-weight data exchange format. RapidJSON should be in full compliance with RFC7159/ECMA-404, with optional support of relaxed syntax. More information about JSON can be obtained at

RapidJSON is cross-platform. Some platform/compiler combinations which have been tested are shown as follows.

Users can build and run the unit tests on their platform/compiler.

RapidJSON is a header-only C++ library. Just copy the include/rapidjson folder to system or project's include path.

Alternatively, if you are using the vcpkg dependency manager you can download and install rapidjson with CMake integration in a single command:

To generate user documentation and run tests please proceed with the steps below:

On successful build you will find compiled test and example binaries in bin directory. The generated documentation will be available in doc/html directory of the build tree. To run tests after finished build please run make test or ctest from your build tree. You can get detailed output using ctest -V command.

It is possible to install library system-wide by running make install command from the build tree with administrative privileges. This will install all files according to system preferences. Once RapidJSON is installed, it is possible to use it from other CMake projects by adding find_package(RapidJSON) line to your CMakeLists.txt.

Usage at a glance

This simple example parses a JSON string into a document (DOM), make a simple modification of the DOM, and finally stringify the DOM to a JSON string.

Note that this example did not handle potential errors.

The following diagram shows the process. 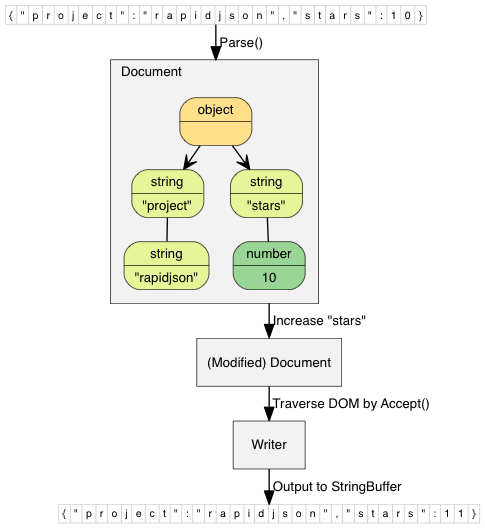 RapidJSON welcomes contributions. When contributing, please follow the code below.

Please help us by providing minimal reproducible examples, because source code is easier to let other people understand what happens. For crash problems on certain platforms, please bring stack dump content with the detail of the OS, compiler, etc.

Please try breakpoint debugging first, tell us what you found, see if we can start exploring based on more information been prepared.

NOTE: Be sure to merge the latest from "upstream" before making a pull request!

You can copy and paste the license summary from below.