This section records some design and implementation details.

The basic relationships of SAX and DOM is shown in the following UML diagram.

With this design, SAX is not dependent on DOM. Even Reader and Writer have no dependencies between them. This provides flexibility to chain event publisher and handlers. Besides, Value does not depends on SAX as well. So, in addition to stringify a DOM to JSON, user may also stringify it to a XML writer, or do anything else.

Both SAX and DOM APIs depends on 3 additional concepts: Allocator, Encoding and Stream. Their inheritance hierarchy is shown as below. 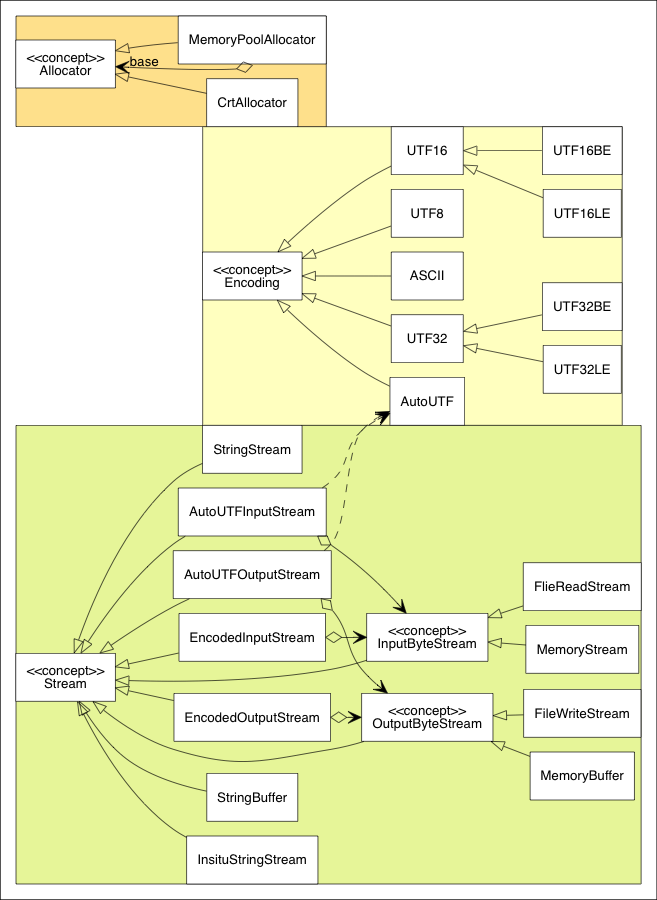 Value (actually a typedef of GenericValue<UTF8<>>) is the core of DOM API. This section describes the design of it.

Value is a variant type. In RapidJSON's context, an instance of Value can contain 1 of 6 JSON value types. This is possible by using union. Each Value contains two members: union Data data_ and aunsigned flags_. The flags_ indicates the JSON type, and also additional information.

The following tables show the data layout of each type. The 32-bit/64-bit columns indicates the size of the field in bytes.

Here are some notes:

The 32-bit flags_ contains both JSON type and other additional information. As shown in the above tables, each JSON type contains redundant kXXXType and kXXXFlag. This design is for optimizing the operation of testing bit-flags (IsNumber()) and obtaining a sequential number for each type (GetType()).

Number is a bit more complicated. For normal integer values, it can contains kIntFlag, kUintFlag, kInt64Flag and/or kUint64Flag, according to the range of the integer. For numbers with fraction, and integers larger than 64-bit range, they will be stored as double with kDoubleFlag.

Kosta provided a very neat short-string optimization. The optimization idea is given as follow. Excluding the flags_, a Value has 12 or 16 bytes (32-bit or 64-bit) for storing actual data. Instead of storing a pointer to a string, it is possible to store short strings in these space internally. For encoding with 1-byte character type (e.g. char), it can store maximum 11 or 15 characters string inside the Value type.

A special technique is applied. Instead of storing the length of string directly, it stores (MaxChars - length). This make it possible to store 11 characters with trailing \0.

Allocator is a concept in RapidJSON:

MemoryPoolAllocator is the default allocator for DOM. It allocate but do not free memory. This is suitable for building a DOM tree.

When parsing JSON from a stream, the parser need to skip 4 whitespace characters:

A simple implementation will be simply:

However, this requires 4 comparisons and a few branching for each character. This was found to be a hot spot.

To accelerate this process, SIMD was applied to compare 16 characters with 4 white spaces for each iteration. Currently RapidJSON supports SSE2, SSE4.2 and ARM Neon instructions for this. And it is only activated for UTF-8 memory streams, including string stream or in situ parsing.

Note that, these are compile-time settings. Running the executable on a machine without such instruction set support will make it crash.

In an early version of RapidJSON, an issue reported that the SkipWhitespace_SIMD() causes crash very rarely (around 1 in 500,000). After investigation, it is suspected that _mm_loadu_si128() accessed bytes after '\0', and across a protected page boundary.

This is not feasible as RapidJSON should not enforce such requirement.

To fix this issue, currently the routine process bytes up to the next aligned address. After tha, use aligned read to perform SIMD processing. Also see #85.

During optimization, it is found that some compilers cannot localize some member data access of streams into local variables or registers. Experimental results show that for some stream types, making a copy of the stream and used it in inner-loop can improve performance. For example, the actual (non-SIMD) implementation of SkipWhitespace() is implemented as:

Depending on the traits of stream, StreamLocalCopy will make (or not make) a copy of the stream object, use it locally and copy the states of stream back to the original stream.

Parsing string into double is difficult. The standard library function strtod() can do the job but it is slow. By default, the parsers use normal precision setting. This has has maximum 3 ULP error and implemented in internal::StrtodNormalPrecision().

When using kParseFullPrecisionFlag, the parsers calls internal::StrtodFullPrecision() instead, and this function actually implemented 3 versions of conversion methods.

If the first conversion methods fail, it will try the second, and so on.

The naive algorithm for integer-to-string conversion involves division per each decimal digit. We have implemented various implementations and evaluated them in itoa-benchmark.

Although SSE2 version is the fastest but the difference is minor by comparing to the first running-up branchlut. And branchlut is pure C++ implementation so we adopt branchlut in RapidJSON.

Originally RapidJSON uses snprintf(..., ..., "%g") to achieve double-to-string conversion. This is not accurate as the default precision is 6. Later we also find that this is slow and there is an alternative.

However, since it is not header-only so that we implemented a header-only version of Grisu2. This algorithm guarantees that the result is always accurate. And in most of cases it produces the shortest (optimal) string representation.

The header-only conversion function has been evaluated in dtoa-benchmark.

The iterative parser is a recursive descent LL(1) parser implemented in a non-recursive manner.

The grammar used for this parser is based on strict JSON syntax:

Note that left factoring is applied to non-terminals values and members to make the grammar be LL(1).

Based on the grammar, we can construct the FIRST and FOLLOW set.

The FIRST set of non-terminals is listed below:

Finally the parsing table can be constructed from FIRST and FOLLOW set:

There is a great tool for above grammar analysis.

Based on the parsing table, a direct(or conventional) implementation that pushes the production body in reverse order while generating a production could work.

In RapidJSON, several modifications(or adaptations to current design) are made to a direct implementation.

First, the parsing table is encoded in a state machine in RapidJSON. States are constructed by the head and body of production. State transitions are constructed by production rules. Besides, extra states are added for productions involved with array and object. In this way the generation of array values or object members would be a single state transition, rather than several pop/push operations in the direct implementation. This also makes the estimation of stack size more easier.

The state diagram is shown as follows: 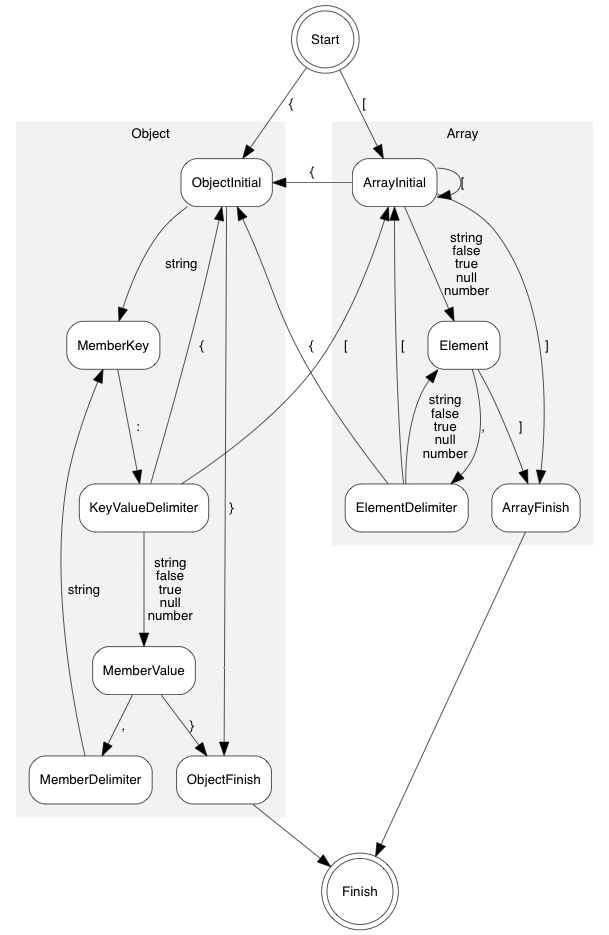 Second, the iterative parser also keeps track of array's value count and object's member count in its internal stack, which may be different from a conventional implementation.